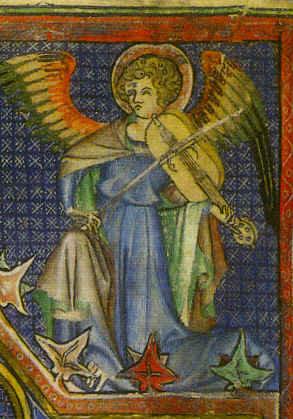 As I deal with the craft of building medieval instruments, my fundamental attitude is one of respect.  Master medieval craftsmen were capable of creating products requiring a sophistication of skill equal to monuments of any age since.  From the lofty Gothic cathedral to the intimate illuminated manuscript, they excelled in their craft.  My time spent studying the British Museum citole has shown me that such pinnacles of workmanship occurred in musical instruments as well.

Medieval instruments are precursors to modern ones.  However, the line of succession may not always be direct, nor is it necessarily progressive.  As fashions changed, so did the instruments.  Thus elements of the rebec and vielle were adapted into new instruments such as the violin, but that doesn't mean that all rebecs and vielles were violins-waiting-to-be.  Rebecs and vielles had unique properties that served their time, and were lost in the violin.  One of my goals is to achieve these properties.  By so doing, I hope to give modern players another tool to explore approaches to medieval music.

While I do not exclusively use tools available to the medieval craftsman, I have found that in many processes my tool of choice is the same as theirs.  Thus I may cut out rebecs on a bandsaw, but I hollow them out with a mallet and gouge.  Sometimes consideration of their tools influences my choice of construction: for a craftsman without a thickness planer, it is easier to hand shape a gentle arch into a soundboard rather than trying to achieve a perfectly flat one.  Since an arch is also structurally superior to a plane, why fuss with flatness?

For me, the lure of approaching this lost craft is the excitement of creating a viable solution to a spectacular puzzle of which only a few pieces remain.  Searching for and connecting the disparate pieces is a rewarding process, allowing me to combine my roles as musicologist, craftsman, performer, and teacher. 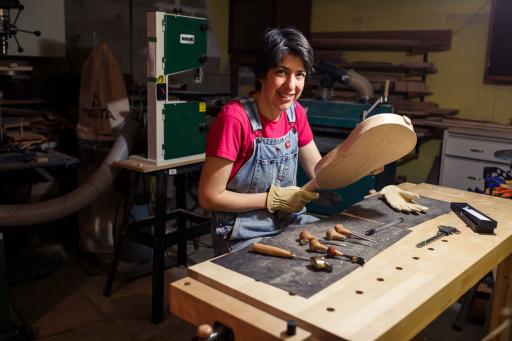 She holds a BM in Music Education and an MM in Violin Performance, with a concentration in Early Music, from the University of Delaware, and an MA in Musicology from the University of Minnesota. She teaches violin and viola performance in private lessons (both modern and historical technique), and frequently gives lectures in schools about different aspects of music in society. Her most influential teachers have been John Madura, Nicholas Mann, Russell Murray, and David Douglass.

When Sebastian Verdung set about writing an instrument manual in 1511, he described the rebec and the trumpet marine as "unprofitable instruments," a disparaging remark indeed.  However, his only real complaint was that he was unable to describe how to play them--the only way for a person to learn that was to practice!  As a young instrument maker in search of a good name, who happened to build rebecs and trumpet marines, I was unable to pass up this opportunity for a memorable name.  It has resulted in many laughs, jokes, looks of incredulity, twinges of pain, and good conversations.  Here are a few of my favorite quips.

One of Kate's more profitable (pardon the pun) teaching experiences was teaching an early music workshop to orchestra students at Chippewa Middle School shortly after she graduated from Delaware.  One of the students in the class was Arwen Hotchkiss, who had so much fun she decided to take a summer medieval performance class from Kate, and then was one of three students who wanted to build rebecs of their own.   Arwen finished her rebec a few years later as part of her high school senior project.  She built a second rebec with Kate while finishing a Medieval Studies degree at Augsburg University.   In addition to building medieval instruments, she is interested in stringed instrument repair.  She spent a summer working with Jenny Becker, and  attended the violin making school in Red Wing in 2010-2011. She worked part time here at Unprofitable Instruments from 2007-2010.